Slightly late post -apologies – Peters Birthday (91) lunch, then a funeral the day after etc!
The sailing was breezy again from the SSW and initially wet – yet again!
Officials Hywell (again) and Alan, in the Box were Karen and Sonja. Only David (Solo) and Me/ Jane (Ent) in the morning. Nice long course to suit the wind E to J, only to be confounded on the first lap by a massive down-pour which killed the wind off Garricks. Merciful race team changed the course to an I and we finished on time. 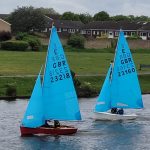 In the afternoon the wind freshened and there were a few fierce gusts, as clouds whipped over, but no rain. Only one GP out with John and Sue, there were two but Keefy rolled gently in before leaving the quayside. His poor crew was left to ponder. Only one Merlin too, John and Olivia. The premier class being the Handicap fleet. Ben was Lasering and the Solo’s had David and Nigel duelling. In the Enterprises a worthy match race between Ellen/Sophie and me withy Ra. This was a thriller and very close and very enjoyable.
We returned to excellent catering by Lucy P and Brian and the Pop Up Bar by Ian and Nick. There are some fine action pics on the Whatsap by Hywell. Pictures of the Sunbury Rally from the day before.
Warming up now so next Sunday may be worthy of its time of year.
Phill