No Blog last week to respect those that lost so much in the terrible fire on Platts Ait. Good to know we have our no smoking rule. Sunday 9th May gave us intermittent cool and warm sun with a very frisky southerly. All the way from Lymington, Steve and Sue along with Richard Page, from Sunbury, officiated. In the Box were Nicky and Jo and the nice tea was provided by Sue and Lizzie.
Only two takers in the Morning David in his Solo and me with Jane in the Enterprise. Quite  challenging conditions but a good tussle for two laps and the David overheated and had to retire. After lots of water and a discarded wet suit he recovered. Elvin fresh from its escape from the fire was taken down river by Morgan with five very well dressed damsels as crew to, I not where. Lucky Boy!
Many more takers in the afternoon.  The GP’s had Derek with Mary, John with Sue and Keith with Susan.  Derek and Mary did the first beat but decided it was not for them. Their point was proved as Keith and Susan came to grief on a gybe and spent considerable time in the river as Keith examined his hull. John and Sue sailed on to win.
Strong Merlin fleet with Hywel and the tiny, fearless Effan, Stuart with Nicola, Andrew with Ellie and John B with Deirdre, who all had a close race to the finish with Hywell/Effan just edging it.
Great to see so many Handicappers, with the Wayfarer helmed by Emily and crewed by Rob and the crisp girl Ava, Nigel in his Solo, Peter’s Comet with new team Ben and Harry and a welcome return of the Mirror helmed by Phil and crewed by Sammy and Charlie. The Mirror had a piratical feel with cutlasses and super shooter along with, even a Monkey. It was sailed with joy and in memory of John Shankster. The new team sailed a stormer and won.
Only two Enterprises – Ian with Sophie and me with Jane. Two too quickly became one as on the first breezy beat and near the windward mark I got caught on port by Stu in his Merlin, on starboard with spinnaker set and apace, in avoiding him I lost control and capsized. Quickly flipped up by Rob Heath we called it a damp day. Ian remained untroubled to finish. 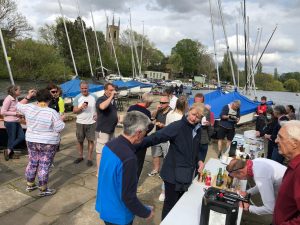 Pop up Bar again well run by Ian and Richard with Roasted Nuts to console. The presence of children make a considerable difference to the feel of HSC.
Phill