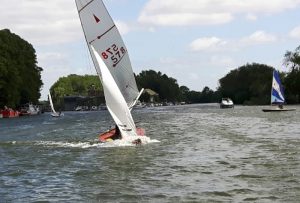 Rushing mighty wind of biblical proportions on Sunday 5th July. Coming from WSW direction in big chunks. Bit too much for the Merlin’s as only expert visitor Arthur with Livvy out in John and Deirdre’s boat. The latter were on duty with Peter OTI assisting and also Nicola lending a hand. No incident with the Merlin except, perhaps wisely, no kite.
Next went two Enterprises with one GP (first of the season I think). The Ents. had reduced rigs which really paid off as they soon got away from the over canvassed GP in spite of the smaller jib. Ian and Sophie and Ellen with Lucy were in the Ents and John Hollands had me as crew, attempting to hold the jib in. Close encounters for the first beat and then on the second the Ents got away. Ian and Sophie celebrating in Olympic fashion after crossing the line first.
Next out was veteran Merlin sailor Andrew in Peter’s Comet against Laser Man Go. I am not sure which fleet Nigel, in his Solo, was in but he was out there revelling in the conditions. All fleets did the D to H course and the gybe mark didn’t claim any victims this week. 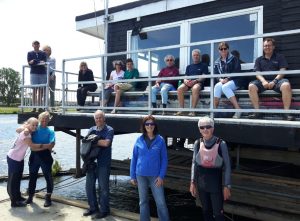 Some great pics and a video from Deirdre and then a group shot of all present, social distancing in the open air, on the downstream balcony as it was too windy to sit at the front. Nigel put lots of warning notices up for our trespassers who have been plentiful on hot days.
See more of you (hopefully) next week. Phill