The Topper is an 11 foot sailing dinghy designed by Ian Proctor. The Topper is a one-design boat sailed mostly around Ireland and the United Kingdom. It was recognised as an International class by the International Sailing Federation (ISAF). The boat is constructed from polypropylene,  and is popular as a racing boat or for sail training.

The Topper was designed by Ian Proctor in 1977 as a One-Design racing boat. The Topper has been in continuous production for over three decades and over 50,000 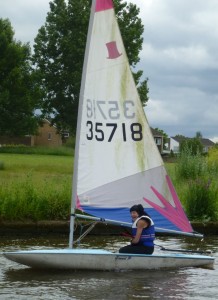 The Topper dinghy is widely used for racing, but it has also gained popularity as a boat in which to learn how to sail. The Topper was originally designed with a glass reinforced plastic (GRP) hull, however, it was later decided that the Topper should be constructed withinjection moulding, using polypropylene which makes it a relatively light but durable boat. Following this change from the GRP to the injection moulded Polypropylene hull, sales of the Topper soared.

Toppers at the 2006 National Championships, WPNSA.

Although the Topper was originally rigged with an aft mainsheet, since 2004 the option to use a centre main has been allowed. The motivation for such a change being that most other dinghies, including the ones Topper sailors are likely to advance to, are rigged with centre mainsheets.

In 2005 a smaller 4.2 m² sail was approved, which can optionally be used in favour of the standard 5.3 m² sail. The smaller sail is more efficient than a larger sail that is reefed. The first 4.2m² national championships were held in 2010.

At 11′ the Topper is transportable by car, and the mast splits into two sections, allowing the spars to be stored and transported.

Despite the longevity of the design, the Topper Class remains one of the fastest growing classes in the UK, with a very active national association. The Topper class is a full ISAF International Class. Over 350 boats attended the most recent UK Nationals and Inland Championships. Every year there is also a World Championships – 200 boats competed at the Topper Worlds in 2011. One of the classes favorite venues is Lake Garda where for the first time ever the competition was held in consecutive years in 2006/07.

The 2014 GBR and World Championships are held in Pwllheli, north Wales.

The Topper Class consistently has the highest turnouts at the RYA Zone Championships and the highest percentage of RYA Transitional Youth Squad members. Most ‘GB Young Sailor of the Year’ nominations in recent years have come from within the Topper Class. The RYA recognise the Topper Class as the most successful “pathway” class.