This was the weekend of our regatta and as a respected member of the Afterguard opined, the marquee may have been at risk and the blustery wind may have put many off sailing. As it was the beastly bug!
Whatever, the careful organisation by the Commodore and Ellen ensured we did have some exciting and well organised, processional fleet sailing on Sunday with suitable precautions. This was assisted, no end, by the experienced team of Derek May as race officer, Mary May as timekeeper and Robert Heath as safety cover.
As forecast the wind was strong 17 mph, with gusts of 26 from the south west. Really good showing of the Merlins again as John went out with Livvy and Philip was out with Lizzie in the first flight. The second flight was Suzie with sister Livvy, Richard with son in law James and Stuart with expert crew Nicky. This flight received much acclaim and media, especially for the intrepid sisters. Richard stormed into the lead ably assisted by the muscular James and was leading the other two by half a down-wind leg, even with Stuart’s spinnaker flying. As he approached the gybe mark, off the Church Land, one of those foretold gusts hit and his craft took off and Richard exited the transom. The boat executed a graceful swoop and with James up-ended. This was captured on video and along with other exciting pics can be seen on our whats-ap, facebook.or below. 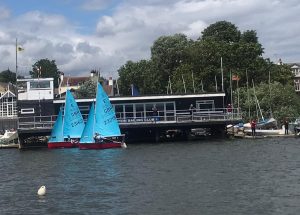 Three Ents out Ellen with classic crew Lucy, Ian and Sophie and me with, press ganged, Philip Dalby, for which I am very grateful. The flying Dutchwoman had a full rig up and explained this away with an airy ‘that is all I have’. The more cautious other two flew their reduced sails and just prior to their start a massive gust hit along with a downpour. They looked at each other with grim satisfaction. But  Mam had the last laugh she just flew away, leaving us to fight a whole race duel, tack for tack. During this experience I learnt a few Merlin tricks, Philip learnt to cope with a helm that fell over a bit and to counter possible capsizes. It went to the wire with Ian/Sophie taking it by half a boat length, captured beautifully on film by Amelia. Ellen and Lucy won by a considerable margin. A magic race – thanks all.
Then we had the Solo’s with Nigel and David in contention. Once again Nigel outperformed the Hon Sailing Sec. This might have been due to out-pointing ability, body mass, caution by the latter at the gybe mark or just simply superior performance!
Finally Laser Man Go took on John Hollands in Peter’s immaculate Comet. A well known parable comes to mind about Hares etc! I noticed the careful owner removing all vulnerable items from his boat, a premonition from a wise old combatant perhaps? All went well for much of the race with equality of performance. Then again the guru struck as both approached the gybe mark and over they went. With low freeboard, masses of youthful energy and experience of this situation Go Man was swiftly up and away. Sadly for John, whilst Comet’s are easy to sail and friendly to the less experienced they do ride high for recovery. John was plucked from the river by the ever attentive Rob assisted by Ian.
Not the usual well attended social gathering, drink, food, dancing and conviviality of our usual Regatta but a pretty good stab at it. Well done to all who contributed.