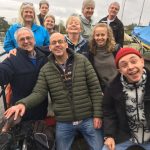 After a magnificent night out at Oatlands Park Hotel where the food was hot and delicious and the disco even hotter, there were a few red eyes and late arrivals. Those that did make it were hardly enthused by the drizzle, very light southerly and slate grey skies. But there is a series to be fought for and it is better to sail than to sleep. Sensible short triangle course set by the Aviator and Richard Cass, with a low E and F and a high H or I Middlesex to H Surrey for some. With the strong stream the arbiter was the starboard tack across the front of Garricks Ait to H Surrey.
Three Enterprises out with Ian and Sophie, Jane with Amelia and me with mango Ben. Very close racing for the first part of the race until Ian had the misfortune to be swept into the windless and gushing channel which ended his race. This fate was narrowly averted by the other two boats one who managed to go high and the other who missed the cast iron barge moored off the island by two metres.
Next the GP of Derek and Mary went out but their previous expectations came to pass with a retirement. In the Handicap were Keith alone in his GP, James Peel Comet, David Solo and our convivial Commodore who won her race with Brian. 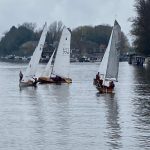 Four Merlins out John with Livvy, Andrew and Sue, Stu with Nicola and Hywell with  Paul. It looked very close racing to me but the Welsh/Dutch pair had it.
In the Box were Anna and Deirdre and caterers were George and me. Yes I know I was sailing but George had the seasonal spirit and let me! In the Bar various helpers and lovely Rebellion Beer.
Next week the Frostbite continues and the Children’s Christmas Party happens so be prepared.
Phill