Sunday March 24th offered sun, 12c and a nice skippy north westerly. In the morning mix were the Hon Sailing Sec (Solo), Brian helming Chris, Alexandra helming me and Graham with Lucy in a GP. Nice course set for the conditions by an ailing Rob with Graham P assisting. With an E and an I to port, with north in it so no gybes. In the box was Michaela (who generously released my helm) and Susan, keeping time. 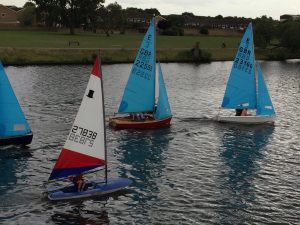 In the afternoon our Enterprise fleet again had a good turn out with Chris/Brian, Ellen/Nigel, Col/Amelia, Ian and a welcome return of Howard, Sophie/Jane and me/Alexandra. Ellen storming away inspired by her restored boat.

The GP fleet had John/Sue, Kevin/Maddie, George/Chris and Keith with Roger (relaxing). One Merlin out with their fleet captain setting an example and Dad. In the handicap fleet was a rather sinister, shark coloured Laser as a new arrival. Its skipper not sinister but sartorial as ever. Out also David in his Solo.

It was a nice wind especially off Bell Hill, where it freshened considerably, and crossing to the Surrey bank up river was advantageous as there was a lift way up the bank to the first tree. Great to be back under sail.

Healthy tea, for the healthy, and licky for those not so, by Ali and Maddie.

See you Thursday when we climb a mountain with Sherpa’s Nigel and Colin.

Usual apologies to anyone neglected. Philip

SUNDAY 12 JULY Following the success of racing to date sailing this Sunday will follow a similar format. Click below for RACE ENTRIES AND SAIL TIMES.

SOCIAL CALENDAR 2020 will be updated as restrictions are lifted. AVAILABLE