After a stormy night and lashing rain this day subsided into a rather laconic little southerly, with the occasional sunshine and considerable warmth. Very experienced duty team of John Hollands and Keith, so pristine pontoons, care with the fences and careful race management. Dorothy and Claude rang the bells, sounded the horns and played aires from the boite! Due to the violent previous weather there was a marked reluctance and absence of participants. However a deal was agreed between Brian, me and Jane. So out we went to enjoy a nice little breeze, Brian dressed to swelter in his Comet and me with Jane Enterprise. 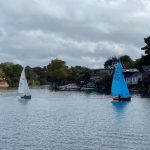 In the afternoon a few more arrived. Ian with Hannah and me with Jane in Enterprises to do battle for the last of the 4th series. The course was now down to off Bell Hill, a short, tricky beat to Garrick’s island, up river to an E mark off the barges, another short beat to the Surrey bank and back down. The wind had now become very light and demanding. Ian led by a distance after a good start but after two laps took the middle of the river, was blanked by other starters and we were able to slide past hugging the Surrey bank. Thereafter we had a very tight race the lead changing at least four times. After an hour and a half when all others had finished and in the last lap, Ian overtook but just off Garrick a friendly swan took a liking to Hannah and tried to get into their boat, Ian was diverted and tried to discourage the bird with his hat, we slid by to windward and we all finished exhausted. I must remember not to be rude to Keith before a race, only afterwards. Full marks for getting us in with covers on just before a massive electric storm hit accompanied by lashing rain.
Only one GP out Derek and Mary who blithely enjoyed a cruise. In the Handicap class George took on Brian in their Comets and won. No Merlins, a big event at Ranelagh Putney.

Splendid tea by Graham (so domesticated) and James (see pics on whats up)
Next week we start the Frostbite Series – just one race, first start 1130 and sausages etc after.
Phill