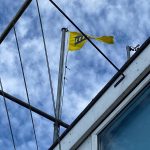 Welcome back to the weekly blog and the flag being flown once more above Hampton Sailing Club.
After a traumatic and distressing period which is still not over we are back! Saturday 20th June was filled with the joy of a virtual Baby Shower for Lucy, and Graham was around too. Celebrating too were family Bunner introducing their beautifully kept Wayfarer to the club island. May you enjoy her well.
With the tremendous initiative of our Commodore and Rear Commodore sailing commenced on Sunday 21st June 2020, to much acclaim. With appropriate distancing of participants, small fleets raced against each other as the plentiful photo’s show on the whats-ap and website.
With a sparkling SSW wind, of at times 15 mph, which veered to the WSW, cracking sailing was enjoyed. Spinnakers were up and Ben (Laser Man Go) was down; so an approach to normal again.
After a hesitant start the Merlins went first with Simon and Claude and Greybeard with Deirdre. Close racing followed with Simon just crossing the line first. Excessive string was the alibi for the castaway.
Next went the Enterprises, the Rear with Sophie and me with Jane. Ian got into irons just at the start so we got the jump on the Surrey bank. It was thrilling to be back with some tippy tacks and some exciting,polled out, run’s.
I think Ben went next, but one can never really tell as Ben has his own unique style. With him went George in his Comet and John Hollands in Peters Comet. This was a really close race with the lead changing often. After the designated, for all, three laps one tack in the last beat to the finish just gave it to John.
Yet another close encounter with the last fleet, the Solo’s of the Commodore and the Hon Sailing Secretary. These two matched each other tack for tack for all the race with Nigel just taking it by a few boat lengths. The HSS was suffering from the bite of a Silesian Viper black thorn whilst undertaking voluntary tropical garden maintenance, The blog wishes him a hasty recovery.
Excellent Time by Ellen and fastidious ‘alert’ by Race Officer Richard Cass. There were many club watchers, including the expectant one. It was great to see them, even if from afar. Great photos thank you for those too.

Keep Safe! Be Alert! See you next week. Phill

SUNDAY 12 JULY Following the success of racing to date sailing this Sunday will follow a similar format. Click below for RACE ENTRIES AND SAIL TIMES.

SOCIAL CALENDAR 2020 will be updated as restrictions are lifted. AVAILABLE