Another packed weekend for HSC 18th/19th May. A really big thank you for the team that repaired Garrick and got it back into the water enabling the majority of our team to get off the island to attend Staines SC. 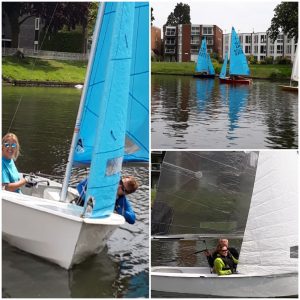 This was for the Mid Thames Trophy where our team led by; the Commodore and Maddie (GP), Ellen/Nigel, Stuart/Claude and me with Alexandra (Ents), competed against the home club and Desborough SC. On a dull day, with never more than a 3 mph breeze, which twitched about, we did battle. The river here, which flows more or less north to south, is edged by large blocks of flats on one side and large detached houses with long lawns on the other which makes for the intriguing wind patterns. 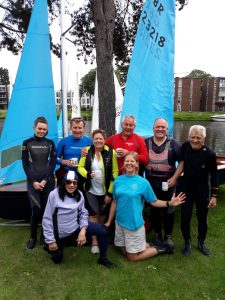 The fleet, which was dominated by single handers, was split into two and there were about 15 boats but it was the overall consistency of results, rather than the individual, that won it for Desborough, the holders.

Staines SC is a charming Art Deco bungalow with extensive grounds and very friendly members and Commodore. Even with the conditions it was an enjoyable day in which we came second.

Saturday evening, Olivia Bell, the Merlin Fleet Captain, hosted a fine fleet dinner at a pub in Teddington. She made a good and clear speech to which the Commodore replied in his familiar jocular manner. Olivia also invited Jane and I as guests which was a really generous gesture.

Sunday at HSC must be for others as I was at Minima with Christopher for their bi-annual Enterprise Open. Our races, apart from the first one, were held not far from Kingston Bridge in whatever breeze there was. (Edit by MP – They came first and brought home the trophy.) Further up river it looked very flat indeed. Some of our Merlins were up river at Thames SC so it is not surprising they abandoned.

SUNDAY 1 MARCH Long (9k) or short(4.5k) walk in and around Denbies followed by lunch at Denbies PHOTOs