Sunday 16th August had us sailing the first race of our fourth series. A return to almost normal, if anything can be so in this period. Whatever, it is a step in the right direction if we do not want this crisis to totally take over our lives. This takes nothing away from our previous sailing this year which was an innovative and enjoyable experience thanks to our Commodore and his dedicated helpers.
This day was a pleasant change from the intense heat we have experienced recently with a light south easterly which rapidly veered to a south, south, westerly breeze with overcast skies and threats of thunderstorms. George and Ben were our excellent race team and Susan had generously jumped into the breach of the time keepers box. The courses were E or D upriver and H or I down.
Stuart and Nickola were first off but had no opposition in the Merlin fleet. There was sufficient wind for the spinnaker, which gave us some cheer.
Then out went the Enterprises, Ellen with Sue, Ian and Sophie, Richard with double crew James and Luke, who I must learn to distinguish, and Me with Jane. The breeze had now increased slightly and made for quite a technical race, one bad tack or gybe could lose you a place. Certainly going round the wrong mark could. Only Ian’s considerate reminder saved me. We had a close and exciting race that lasted exactly an hour and reminded me how indulgent 40 minute races were.

Very good medley out for the Handicap fleet with the maiden race for the Wayfarer, helmed by Emily, crewed by Rob, Ava and Harry, which performed well in the light breeze. Fanfare for the Master out racing for the first time in his Comet, 90 years young and a commanding lead for three laps. Claude commanded a Comet as well as David who was sailing with the irrepressible Honey and then there was the Commodore in his Solo, losing the lead with a mark collision (unseen) and a sporting 360. 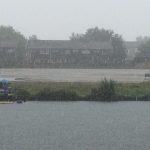 Last out, on GP time, only two, but such quality, Derek and Mary and John with Alison. They only had 25 minutes or so as their Fleet Captain brought them in before the heavens opened and Hurst Park was covered with hail (see pic from George). 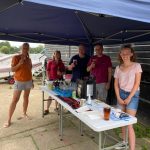 Open Air Pop UP Bar in action operated by Stuart, Ian and Nicola with a nice pint of Rebellion IPA on tap.
Phill