High winds from the south south west, with 20 plus mph gusts welcomed us to a low turn out at HSC. The blustery wind made sailing demanding and only four boats took to the water – Brian in his Laser, David Solo and me with Jane and reduced rig. Stuart and Andrew set an E mark up river and to give a tricky sort of mini  beat H Middlesex to H Surrey. The Hon Sailing Sec. stormed off and was 2nd at E but raced away on the run with much twitching of controls. Arriving easily first at the H mark Middx he performed a perfect pirouette but sadly not the way the course board indicated. On being shouted at and being confused he retired. Then much to the chagrin of the double hander Brian seized control of the race and went on to win.  The Topper, crewed by Elise, Bea and Ines, whizzed about in the high winds tacking and gybing without any apparent purpose except pleasure, followed closely by the Safety Boat driven (at times) by Captain Cullum.
The afternoon races brought an increase in the wind or certainly the gusts. Just two Enterprises braved it with reduced rigs. Sophie (fresh from a week of high wind sailing in Poole Harbour) with Dad and me with Alexandra. Whilst the fleet captain had a good start he capsized on the first beat, the crew brought it up with alacrity, born of Kevin experiences but the newly qualified ‘Performance Sailor’ sped by. After two legs with the water nearly gone, speeding down wind with pole erect the duffer broached big time and it was swim time again. Once again the balletic crew saved the day and pulled the soggy helm aboard whilst again staying relatively dry. As Sophie was now on the horizon resignation set in.
In contrast the afternoon brought out the GP fleet, who all stayed upright,  with John/Sue, George/James (new member) and Keith with Susan. Heavy weather expert Mary helped with the time keeping which was shared by Sarah, Margaret and Hillary. Stuart and Andy kept an eye on the duffer.
Andrew represented the Merlin fleet along with Claude but no kite flew! In the handicap fleet David Solo, Nigel Solo and Brian Laser. Brian showed me capsize solidarity but blamed faulty rig advice from the Hon Sailing Sec.
The Galley was run by Ellen, Anna and Chris who produced some very licky cakes and a superb chocolate button cake which Nigel majored on. Great to see some of our senior members for tea Jimmy, Jean and David with Liz. They show great loyalty to the club. Also the Master who comes every week to help or sail but it was a bit too windy for him this time. Still many old friends missing come back soon.
See you next week. Apologies if anyone left out.   Phill 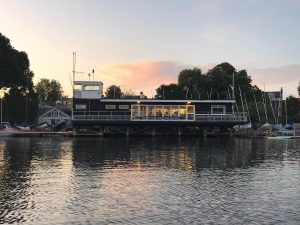 Don’t forget to come along and enjoy a Thursday night sail and supper.

SUNDAY 2 AUGUST For this Sunday's Race entries please click below for RACE ENTRIES AND SAIL TIMES.