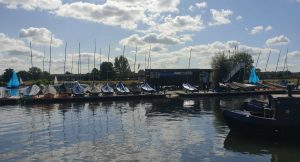 Refreshingly youthful race team in charge on this day, Alex and expectant Dad James, with a few departures from HSC norms, which I found rather refreshing. Grotty little wind from that unfriendly north direction. The team set a short E to I and sometimes we beat and sometimes we ran both ways but always at leisure. In the morning we had Peter Comet. Keith/Amber, James/Andrew GP. Jane/Poppy, me/Connie, Enterprise. Sawyer Topper and Elise/Bea, performing some interesting moves – Topper. 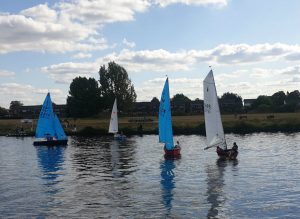 In the afternoon out were Alex/Jane and me/Elise Enterprise, Keith/Susan, Derek/Mary and James/Andrew GP. Peter Comet. Roger Laser and representing the Merlin fleet, yet again, Rob with Jo sans spiders! I think that’s all. Ents, Hdcp and Merlin started together although one Ent’, started before all the others by some distance, going back to much disadvantage but Elise was philosophical. An interesting denotation was introduced to the courses of ‘S’ for short and ‘L’ for long. This caused some controversy as the box has no ‘L’s’ but it worked. The Race officer cleaned up in the Ent., as of course he should do. It must be mentioned that our most senior sailor did both races, truly an example.

Our jovial Commodore appeared, dressed overall in new club apparel and we sang to Mary who is spending about a month celebrating a significant birthday. John and Alexandra Rocketed down in Lymington.

Perfect Time by Margaret and Hilary and Ritzy tea from Angela and Sophie, whilst Lucy broke rocks elsewhere. 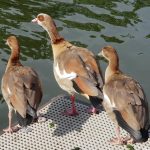 We all wish the redoubtable Claude a rapid recovery and return soon, for, not least, the presence in her absence of considerable goose poo on the pontoons! Culprits may look pretty but deadly rears!!

Enterprise Open next Sunday so I hope all the fleet will be out please.

SUNDAY 1 MARCH Long (9k) or short(4.5k) walk in and around Denbies followed by lunch at DENBIES . Contact Alison

CONGRATUALTIONS TO HSC MEMBERS . See NEWS ARTICLES for results in the Allen Trophy and competing in The Great River Race.