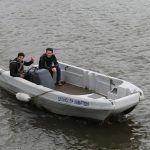 None but the brave on Sunday 1st November. Howling south westerly with gusts of 30 mph but very warm for the season. Fortunately a young and very able duty team of Alex and Tom who followed the fleets throughout the racing in the safety boat, giving confidence.
Time was by George and Chris, good to see you back Chris. 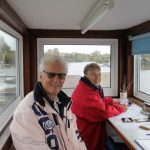 The course was either D to H or E to H (with a starboard rounding mercifully no gybes). Hywell went out in the lone Merlin with a rather contrast in crew to his usual, being more substantial in the shape of John Heath, the boat stayed very flat and the spinnaker came out. Ian and Sophie represented the Enterprise fleet with reduced rig and coped easily with the conditions.
Being rather cowardly I went out with Jane in the Handicap fleet, shorter course, visual reassurance etc!  The two Solo’s revelled in the strong wind and stream, represented by Nigel and David, followed closely by Ben in his Laser and not so closely by me.  John and Sue, the only GP out, coped admirably in the conditions.
They were hard conditions with some considerable gusts one of which hit at the windward mark as a lone swimmer went by and nearly took Ian and me out in trying to miss him and each other. But probably the last sail this year so had to be done.
Our loyal supporter and helper Peter was at hand and we met Hannah for the first time, bit of an age disparity! Some great pics on the whats ap. The Bar popped up and we all lamented the fate of the beer. Sums up the year really. But be of good cheer the virtual Dinner and Dance along with AGM approach.
As Arnie quoth (I) the blog will return. Phill

DUE TO THE LATEST COVID-19 RESTRICTIONS WORKING PARTYS ARE CURRENTLY CANCELLED. PLEASE LOOK OUT FOR THE COMMODORES EMAILS ON:- WORKING PARTY NATTERS