Toppers (with and without sails), SUPs, a Mirror dinghy and canoe were the vessels of choice as the pirate hoard enjoyed various games, water pistoling, plank walking and motivational sweets… With a growing contingent now in the 12+ age bracket there is much promise that the pirate kids will be inspired to take their developing confidence out onto the water under sail in the inaugural Junior series. For now though it was the sheer enjoyment of it!
In true HSC style the afternoon was topped off with an excellent BBQ and social as the sun set.

Great turn out o f boats for the Platinum Jubilee Race. Click here for Phil’s Blog. This was followed by the traditional tea after racing which is surely representative of our once glorious empire, al fresco with table cloths(wind challenged), crust less sandwiches, home made cakes of many varieties, trifle and a superb Jubilee cake baked by Chris-oh and a shot of prosecco. The Commodore made a short speech of thanks to all helpers and proposed a loyal toast. Wonderful tea, only one slight disappointment Sparrow had most of the egg sandwiches.

This annual regatta held by clubs in the middle reaches of the river has not been held recently for obvious reasons. Hampton hosted two other clubs this time, Aquarius SC (Sunbury) and Desborough SC (Shepperton).

Nineteen boats took part in the handicap racing. A majority of the boats competing were Lasers, but we also had 2 Solo’s, 2 Enterprises, 2 Comets, 2 junior Toppers, one very nautical Bosun, one GP14, one veteran wooden Merlin and one very prettily varnished British Moth that fluttered away always near the front. With this variety of traditional dinghies with different PY’s the Timekeepers had their work cut out but triumphed in adversity with their usual good humour.

The weather was kind with sunshine glittering on the beautiful Thames and at times a brisk south westerly by west, blowing down the river. The starts were crowded on Hampton’s short line and therefore the race to the first windward mark was critical – in this the speed and agility of the Desborough Lasers prevailed over many of the two handers.

In the first race Rob Heath and Claude Wheeler steered a vintage Merlin Rocket over the finish line first, with the assistance of a perfect start and a spinnaker. Alas the Merlin’s PY told against it so it didn’t win technically. Thereafter the Laser sailed by Paul Stapleton from Desborough was always at the front in the clear air, tacking on the shifts and showing us all the way.

It did not seem the day for the double handers as they remained mostly mid fleet, frustrated by the single handers flitting about everywhere. Complete victory for Team Desborough then, who retained the handsome Shield Trophy. The individual first prize went to James Clancy sailing the lovely Moth, second was Paul and third in his Solo was Mark Lay. Fine performances by both Topper sailors Oscar Lay and Samuel Clancy (who came third in the second race)

The presentation and warm short address was given by our Commodore Michaela Parker and our Sailing Secretary, David Gettings, made some humorous remarks, as is his wont and presented Oscar with a Medal with ribbons in blue and yellow, the colours of Ukraine and Hampton Sailing Club. RESULTS

The new pontoon and walkway were put into use for the first time, well done to all who participated in this upgrade to the Church Land area. 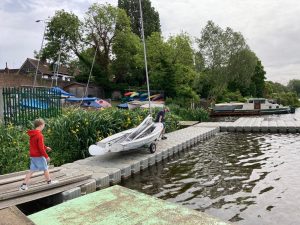 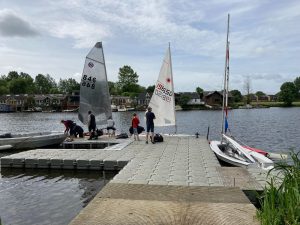 Hair Curt for Charity
Well done to Paul for his fabulous new look in aid of The Little Princess Trust. If you wish to donate please click HERE. Paul has currently raised £920. 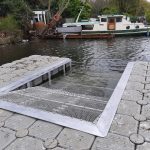 Super new ramp now in place on the new pontoon off the Church Land.

This will make launching and retrieving boats so much easier.

Well done to John Heath and team for a great job.

For our first event of the year 27 members enjoyed an 8 mile walk near Frensham Ponds followed by a warming lunch at The Mill in Elstead. It was a cold, sunny day with blue skies and sailing to watch en route.

Thank you to all the volunteers who have helped build the new pontoon off the Church Land. Looking fabulous.