Sophie Embarks on a New Adventure

Sophie leaves for Lanzarote and will head on to Antigua. We wish her a safe crossing. Watch this spaces for news updates on her journey.

I thought I would share a few photos from our Ladies Night, an evening of partying on a Greek island (aka Benn’s Island) at which much fun was had by everyone involved; ‘random chaos’ or ‘chaotic randomness’ as one of those enjoying the dinner said.

A great MacMillan coffee morning. Fabulous cakes and decoration. The event raised £700.90 Thanks to everyone involved in the planning, preparation and making it all happen, especially Sarah and Alison.

A Thank You from the Mcmillan Cancer Support Team:

The Coffee morning was held alongside a very successful training day with 12 learners and a whole gaggle of helpers expertly led by John Bell. Well done.

Three weeks ago, we bade Bon Voyage to Sophie at Itchen River as she stepped aboard Escapado, a 40 ft Beneteau, for her first taste of Offshore sailing. She was jumping in with both feet to an unknown boat with skipper and crew only met minutes before – when we first arrived, Escapado was in a sling for some remedial repairs following a testing Fastnet race!

From the texts, WhatsApp and a couple of calls we have received, she seems to be revelling in the experience and has encountered a good variety of conditions with some great downwind sailing just recently in the Med.

She is now making her way to St Tropez via Ibiza, ready to join the racing at Les Voiles de St Tropez with some of Europe’s finest boats and crews – so I’ve been reliably informed. After that it’s a relatively short sail to Malta – she’ll be an old hand by then.

We wish her continued luck with fair winds and safe passage. 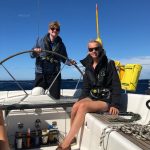 UPDATE 22/09/2021: Sophie now enjoying some great conditions in the Med. Currently moored in St. Tropez to get the boat ready for the regatta next week. Everything coming out apparently to make Ecapado as light as possible . St. Tropez in ‘Tres cher’ … Pizzas on board.

Sophie has now finsihed her regatta in St. Tropez and is now on her way to Malta.. They have stopped briefly in Corsica to sit out some high winds and big swells. All being well she flies back on Monday. It has been quite a trip Well done Sophie xx

Les Voiles de St Tropez is the most extravagant Mediterranean regatta with evening events and parties!

Les Voiles de Saint-Tropez is one of the most significant events in the world of yachting and certainly the most beautiful Mediterranean regatta. Both ultramodern yachts and rare wooden yachts participate in it. Yachtsmen from all over the world get together in the beautiful bay of Saint-Tropez to find out who is better. Yachtsmen of different levels of training, including beginners, take part in the regatta. On our platform, you can choose a team that will be perfect for you.

Sports competition at sea is well combined with an entertainment program on the shore. And it couldn’t be different in the world-famous luxury resort of Saint-Tropez.

The founder of the regatta is the director of Club 55 Beach Club — Patrice de Colmont. The history of the regatta began 30 years ago, in autumn 1981 with an impromptu race between two small yachts. How it all began? The two participants planned a route and rushed to the finish line, which was opposite Club 55. After the race, both teams celebrated and had fun in the club restaurant. During the dinner, a reporter from a local magazine came up to them and later he wrote an article about the regatta in Saint-Tropez. From that moment, the history of this regatta with a unique adventure spirit, which it has preserved so far, began!

The ninth round of the London and South East GP14 Travellers series was held at Hampton SC on the River Thames on the 19th September. Initial expectations of a fleet of 15 soon fell short due to a mixture of an appalling forecast of light winds and heavy rain. With a light and variable WSW windy nine teams came to the start line including six from Hampton and three visiting from Frensham Pond. RO Rob Heath set a course with a long beat upstream to Platts Eyot with a long spinnaker run down to Garricks Ait returning through the line and a scheduled nine laps. Early leaders were Derek and Mary May in “Takitimu” and John and Alison Hollands in “Kraken” both from Hampton with David Innes and John Mcguinness from Frensham coming through to round the windward mark first. The long run gave ample time to test the visitor`s spinnaker work against the local tendency to rely on goosewinging to better cope with the shifts. The three leaders exchanged positions through the first two laps before being hit by some hard rain shower`s with Innes/Mcguinness taking 1st from Derek May and John Hollands who gained a dead heat for 2nd.

After drying out over an excellent lunch the second race started in very light conditions on a shortened course with the windward mark set close to a sunk motor cruiser near the Surrey bank. Innes/Mcguinness led from the line and rounded first with Derek May close behind with Paul Trubridge/Jon Denyer from Frensham and John Hollands fighting for third with Paul Trubridge coming close to threaten second at the finish. After a civilised tea the RO reduced the course further because of the light winds. John Hollands led from the off and gained a big lead which he extended throughout the race to the finish. David Innes rounded 2nd at the windward mark but Derek May came through to take 2nd with Paul Trubridge/ Jon Denyer and Kate Whyatt/Phil Mutton fighting until the finish line to finish 4th and 5th with Graham York from Hampton coming 6th.

Refreshments were laid on by the club`s excellent shore team and thanks were duly offered to Hampton SC for laying on an Open Meeting in what were challenging conditions.

The GP14 Southern Travellers now move on to the Victor Trophy at Welsh Harp on the 2nd October concluding at Frensham Pond on the 10th October. Contact David Innes on innesd142.0@yahoo.com for details.

Under a milky sky, and a gentle breeze oscillating from ENE, E and occasionally ESE, eighteen contestants took to the water for the 2021 Hampton SC Regatta.   An easterly is always good news for less agile boats as upwind is fast(er) through the Garrick cut, and the run to the West is sustained by clever gybes and broad reaching opportunities.   Nigel sent the Merlins to a J mark in Pink Floyd territory, which is where their windward mark remained.  The rest of us contended with I mark and E or D.      Much tactical thought downwind went into whether to sail the middle of the stream, risking the clubhouse wind shadow, or taking a longer route along the Surrey bank.   Upwind it was Keystone Cops as we tacked and swerved, mostly trying to avoid each other rather than anybody else.

In the GP races Kevin Anderson propelled Red Rampage to first place in race 1, race 4 and race 5 guaranteeing first overall for the weekend.  He was crewed by Maddie, and by Elise Bay on Sunday .  John Hollands took Silver and George Bell Bronze.  All the same,  John had two firsts and George three seconds so it was fairly close.

Hywel Bowen-Perkins crewed by Sophie Penwarden, won three races, and came second in two thus cementing the Merlin competition.  John and Livvy Bell sailing the new river boat ‘Grace’, which I have to admit, to the untrained eye looks identical to the previous boat,  is nevertheless probably just as fast with a win, two seconds and two thirds.   John Heath and Nicola Scadden came third, just adrift with eight points to count.

The Handicap class was interesting.   Ben Peerless killed it with four firsts, which meant he got to discard one of his firsts.    Tactically he used his forward position to cover relentlessly.   I wanted to point out to him on several occasions that he was impeding the progress of the Honourable Sailing Secretary, but as they say ‘Rules is Rules’.  In truth it was great to see him deploying the Laser with real skill.  There isn’t another boat in the class at the moment that rides so well in medium to soft wind.  May he enjoy his supremacy.   Overall the Hon. Sec. came second and Brian Tweedie- Smith came third.   Nigel Cooper in his Solo made mincemeat of the careless (Ben and me) in the third race as we went around the wrong leeward mark and had to run back.  Ben still won though, just.  I came third, just.   It was a fun chase.  It was sad but inevitable that Nigel only raced his Solo twice, being DO on Saturday and busy for the fifth race.  I have a feeling that with Nigel and Ben sneaking up on me my days as a pot hunter are under threat.   I will dust off the PY book again as any Sailing Sec. would of course.

We were privileged  to witness both Chambers racing against each other again and it must be said that you can’t tell them apart for skill and tactical talent.  They ended up with the same lowest scores and it came down to who had won the last race.  For the technically minded Jane’s scores that counted were  1-2-1  and Phill got  1-1-2.      Jane held on to Michaela Parker all week end as her crew.  Phill went for a galaxy of stars to crew him with Lucy York, Elise Bay and Alexandra Parker.  Ian Peerless and Sophie Peerless came third  and Ellen Cooper crewed by Deirdre came fourth.

I would like to thank all those who love to sail but who are also called upon to do duties for the sake of everyone else at the Regatta.  According to Duty Man eighteen members of the club served everybody else and contributed to the success of the Regatta.  Instead of listing them all I am going to pick one that will symbolise the whole support effort.    Ellen Cooper, thank you very much, and all those you represent.   Phill calls you the Dutchess.  I don’t know if that is a pun or he doesn’t know how to spell.   Probably both.

Pirates On The Water

We had a wonderful Pirates Day on Saturday. Twenty seven pirates stormed the Club and caused happy mayhem on and off the water, ably assisted by their parents and helpers. A few photographs are attached if you were not able to be there. A huge thank you to Alison, Richard C and Andy D for running the day as well as to the other helpers, BBQ and bar teams who made sure the day was not only fun but also ran smoothly. It was great to see so many families enjoying the club and hopefully we will see all of you again soon.

HSC first venture out on boards. Under the guidance of Brett and team from Ditton Paddleboard Club some intrepid HSC members braved a chilly wind and got to know the river from a different perspective.