The Open was held in light winds and rain. After close racing in the first two races, it was all to play for in the final race with three boats each holding a first and second.

This was also the final event in the De May Vintage series. Overall winners Stuart Jenkins and Nicola Scadden from Hampton. Tim Medcalf & Valarie Hamill from Tamesis were second and Sel Shah & Gemma Horwood in third from Thames.

Saturday evening was celebrated with a delicious Curry supper, guest ales and a few too many Dark & Stormy’s!

Sunday arrived with 13 boats sailing for the Merlin Open and also the final race of the Thames Series. They were greeted with a very gusty and fresh westerly breeze which meant that good spinnaker handling was essential to staying upright, as some found to their cost!!

The first race was won by Phil Dalby and Suzi Bell with John & Livvy Bell 2nd and Simon Girven and Richard Parslow 3rd. Tim Medcalf demonstrated the advantages of a wide decked Martine design boat with a capsize, however still managing to come upright dry inside, which was just as well as the boat doesn’t have transom flaps or self-bailers.

By the second race the wind had steadied and gone SW giving a solid beat upwind and a planing run downriver. After tight racing John & Livvy Bell were 1st with Phil Dalby and Suzi Bell coming in second.

The deciding third race was held in sunshine and a steady wind, a pleasant change from the rain! With plenty of place changing. The final race and the day’s result were 1st John & Livvy Bell with Phil Dalby and Suzi Bell 2nd and Simon Girven and Richard Parslow 3rd which was also their final finishing positions.

Despite a forecast of heavy thundery showers there was a good turn out of home sailors, joined by one stalwart visitor giving a total of ten boats competing. Fortunately the three races were carried out in the dry with the expected rain occurring during the lunch break.

The first race saw some close racing at the front with four boats in contention for most of the race. John Bell crewed by his wife Deirdre led at the start closely followed by Kevin and Madeleine Anderson, with Derek and Mary May just ahead of Richard Ham and Charlie Cotter our visitors from Tollesbury/Welsh Harp.
Richard briefly took the lead on the second lap before being overtaken by Kevin on the third lap, a position he was to keep until the end of the race.

The second race had John and Alison Hollands, the fourth of the husband and wife pairings sailing for Hampton, take an early lead, but on the second lap Richard Ham’s spinnaker work gave him a big advantage and he stormed away to take an easy victory. John maintained his second position finishing well ahead of Kevin.

The final race once again had John & Deirdre take an early lead before Richard’s spinnaker came into play and he came home to an easy victory. Stuart Jenkins and Sophie Peerless led the rest of the fleet home with Derek in third place.

The usual excellent lunch and lovely sandwiches and cake for tea.

Thanks to all the duty team, caterers, timekeepers, bar officers and all who assisted on the day.

Results were as follows

Saturday 21st was the Magpie Race and it was truly blessed by a following wind all the way, this is a rare event. Watching from the Surrey bank the start had an eccentric feel to it with various odd flags flying, sound signals sounding and boats starting then returning and one even consulting the Race Officer. But Andrew does like variety!

All fleets were represented Comet (Tim and didn’t recognise), Enterprise (Duncan and Annie), GP14 (Kevin and Maureen) and two Merlin’s (Rob and Richard)( Stu with Sue) all thirsty for that yard of Ale. As I did not participate I can only rely on my various informants. Two of those blow up board things went but I did not see their start but I expect with their respective cores they did it in record time. All the sailing boats arrived pretty much together and I understand the ale was shared with some getting beery bosoms (is that PC?) bit of a HSC Communion then. Maureen cleansed the cup.

Waiting for confirmation this was the fastest Magpie Race on record. Congratulations to the winners Kevin and Maureen (GP!4). 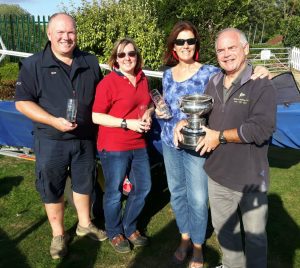 Congratulations to HSC members John & Deidre Bell for winning the Allen Challenge Cup at the weekend with Stuart Jenkins and Nicola Scaddan being placed third. Full sailing report in Yachts and Yachting.. 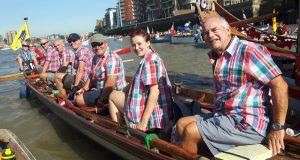 Congratulations to Len Williams Team in a Thames Watermans Clipper for not only completing the Great River Race, London’s river marathon from Millwall Docks to Ham, but finishing in 3 hours 6 minutes 10 seconds. Full classes results on the GGR Results page.

A well deserved beer in the marquee afterwards

Hot sunny day with a light WSW breeze and some irritating twitches in it welcomed our open. We had 10 local boats and one visitor from Littleton Sailing Club out. Race Officers Richard Page and Commodore Kevin set a long upriver course to a mark in the channel off Thorneycroft Island and down river to a mark off Garricks Temple.

The first race saw Christopher Parker and crew Michaela (HSC) fly away into a considerable lead followed by our visitor Ed Pepper and crew El Roberts and then Ian Peerless and Sawyer. The HSC fleet captain hit another boat, nearly capsized, was saved by agile crew, got lots of water in and then did turns. There was very close racing at the front and with some almost windless areas Christopher was caught by Ed and then Philip Chambers crewed by Alexandra Parker. Most of our boats were crewed by young people who have only recently joined the club and they were excellent.

After a nice lunch the second race started at 1.30pm with a shorter course upriver. Christopher and Michaela had a perfect start and though chased closely by Sophie Peerless (youth) and Jane Chambers, followed by Ed, he was never caught.

After a quick break, well needed because it was very hot, the third race was held with four possible winners Ed, Chris, Sophie and Philip. The latter did not start due to exhaustion leaving three to fight it out. Ed had a flying start, tacking onto port on the line and leaving the fleet behind and was never caught. Chris and Sophie had a tight contest until the very last few metres Sophie stole it by half a boats length.

Thursday Evening Sailing Started 23 May
Thursday evening sailing has now started thanks to Stuart, these evenings now form part of the Summer Points Series. Bring a bit to eat for a sharing spread.

Six  adults and five children attended HSC’s first formal sail training sessions this weekend which were based on the RYA syllabus.

What glorious sunny & warm weather we had!  Saturday was marked by light breezes with Sunday starting with more moderate winds, developing into fresh sailing conditions by the end of the day – a perfect way to progress sailing skills.  There was a mixture of classroom sessions and land based drills followed by lots of boat handling experience on the water all under the guidance of our experienced RYA qualified trainers Ben, John and Duncan.  The Juniors also had great fun perfecting their capsize and boat recovery drill!

Delicious lunches were provided from our galley team and great fun was had by all.  Thanks to all those that attended, our instructors and to all our members that helped with the event. 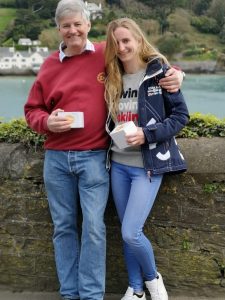