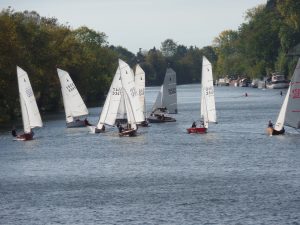 Saturday saw twelve (13) Vintage Merlin Rockets compete in the last event of the season in the De May Series. The De May series is a National Merlin Event for boats and designs over thirty years old. The series has a handicap system to allow evenly matched racing for the wide variety of designs eligible to compete.

Competitors and visitors were given a traditional warm welcome from Hampton Sailing Club. The welcome was top off with a warm strong 15 – 20 knot wind from the South. It was an eventful and testing day for the mature craft being sailed, with some owners taking the opportunity to carry out buoyancy tests whilst still racing!

John Heath & Sophie Penwarden joined the fleet in John’s newly refurbished NSM2 Avalanche (3341) for the start of the second race. Alex & Susannah in 1493 took an early lead chased by the rest of the fleet but were soon joined by John & Olivia.  The lead two boats had very close racing with regular position changes, but it was Alex & Susannah who took line honours, however after handicap adjustments it was John & Olivia who were 1st and Alex & Susannah 2nd. A dacron main for Christmas for Alex one thinks! 3rd were Stuart & Nicola with Hywel Perkins & Lucy Penwarden in 4th.

It was all to be on the third race to decide the winner of the Vintage Open and the De May Vintage Series. Stuart Jenkins needed to be overall 3rd or better to beat Sel Shah to the De May Series title. It was nip and tuck from the start with John & Olivia and Alex & Susannah battling for first place. Stuart didn’t start well but managed fight back to 4th. After 50 minutes the positions were settled John & Olivia were 1st. The retirement of Alex and the retirement of Hywel through gear failure, left Stuart & Nicola in 2nd, Kevin Anderson & Richard Page in 3rd. 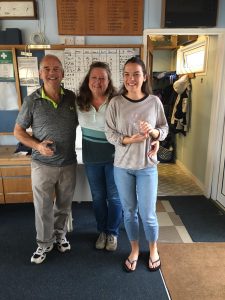 Octagon Trophy - presented to the Vintage Wing by Hampton SC for the 1st Vintage Merlin crossing the finish line prior to handicap adjustment in the De May Series.

Saturday night saw competitors and members Barn Dancing the night away. The beer flowed but not one ‘Dark & Stormy’ was consumed. A very well organised and enjoyable evening was had by all.

Sunday saw sixteen (16) Merlins take to the water for the Silver Tiller event. The very light breeze now came from the North as did the rain.

Spirits were not dampened and topped up with bacon rolls and tea, competitors prepared their boats for the racing.

Racing was very close with positions changing regularly. Alex & Susannah led from the start in Races 1 & 2, winning both with ease. They showed the rest of the fleet how to sail in light airs. At the start of the third race any of the three crews could have been 2nd overall. 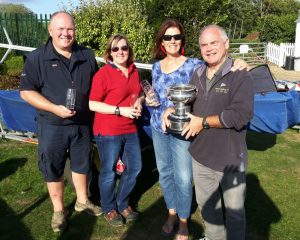 This was the Association of Dunkirk Little Ships Veterans weekend which HSC support each year by providing the Club marquee and the green tables and chairs. 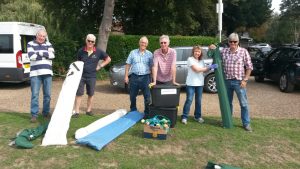 The marquee is erected on the Friday afternoon at the Thames Motor Yacht Club by Hampton Court Bridge .It is used over the weekend by the veterans, carers and boat crews. On the Sunday morning it is used for the Memorial Service.
Volunteers from HSC are taking it down this morning at 11am.
The weekend event is also supported by the Royal Navy with ratings from HMS Collingwood who erect the marquee on the Friday and generally support the veterans over the weekend. Ben as a Sea Cadet joined their group for the Sunset ceremony, crewed Tom Tit on both Saturday and Sunday’s cruises and supported the veterans.
HSC has two Dunkirk Little Ships Elvin and Tom Tit. 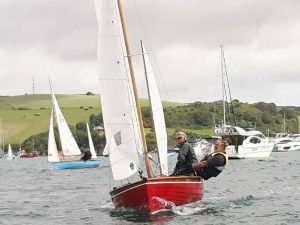 After three attempts to hold this at Hampton due to adverse weather and stream, the Mid Thames carousel between Hampton, Desborough , Aquarius and Staines Sailing Clubs took place on the 5th May in glorious sunshine and a decent (for a river) amount of Easterly wind.  Unfortunately Staines had to withdraw so it was a three way contest.  But we got a demonstation of the super fast Aero 9 helmed by Gareth Griffith (Island Barn SC) in a guest appearance, winning three straight races on the water. Clearly no PY number adjustment required there then!

Hampton put out a double handed team consisting of two Merlins, three Enterprises, plus a Solo for good measure. Four boats to count.  Aquarius SC and Desborough SC had a different strategy evidently, because they fielded nothing but single handers. Aquarius had three Lasers and a Lark sailed singly.  Desborough SC had two Lasers, two Solos and a British Moth.

How did that mix of boats fare?  Hampton’s Stuart Jenkins in his Merlin 3560 was first boat (from a team club) in race one, from Kerin Power (DSC) in his      Solo 4950 , Chris Abell (DSC) in his Laser 160919 third, followed by Paul Stapleton (DSC) in his Laser 144607 fourth.  The pattern of the afternoon was similar as single handers continued to scoop the low numbers.  Desborough dominated throughout with great single handed sailing.  Paul Stapleton, with a fourth, second and a first in the club races, went on to win the individual prize and the single hander prize.  The single hander prize was an innovation from Hampton rather than a precedent but in the event it was unnecessary given that there were 11 single handers out of sixteen boats.  Desborough team mates Kerin Power (Solo), Chris Abell (Laser), Bob Steer (Solo 3781) and Richard Broughton (British Moth 798)   took the Mid Thames Inter Club Trophy in emphatic style winning with 63 points against Hampton’s 83.

Aquarius SC also had a single hander strategy.  Mike Baker was first in his club in his Laser 144389, vying with fellow sailor Pat Halling in his Laser number 4 for club honours. It was great to see Mark Thompson’s Lark 2188 on the water as it seemed to cruise effortlessly against a light stream.  We had hoped to see the classic boats from Aquarius like the Bosun or the SigneT.  Maybe we’ll see them again next year.

From Hampton there were two cadets worth a mention each of whom won a glass tumbler.  Ben Peerless crewed his dad Ian in his Enterprise 22559 and his sister Sophie did the same for Jane Chambers in her Enterprise 23162.   Phil Chambers in Enterprise 23218 evened the score with John Bell in his Merlin 560 (no mean feat) but alas at the point where the tie was broken, Philip missed out. He won the individual prize in rough weather at Desborough last time out, but just missed the cut for the best four boat counted for the result.

Lastly I would like to thank Gareth Griffith of Island Barn who unequivocally demonstrated that if you sail a 4m boat with a 8.9sqm sail that weighs less than an Optimist at 30 kg, you stand a good chance of doing well on a river in light airs.  In the event he and his Aero 2148 took three bullets which probably proves something or other in hydrodynamics. (‘Bullets’ metaphorically, of course, although there was talk……)

At its meeting on 4th January 2018, the Management Committee voted to accept this grant and proceed with setting up the protocols, procedures and requirements to establish Hampton Sailing Club as an RYA Training Centre. The Management Committee has set up a sub-committee to ensure we deliver all the requirements of both Sport England and the RYA, whilst protecting the ethos and normal activities of our sailing club.

The sub-committee comprises of:

The Management Committee would like to thank John and Deirdre Bell for all their hard work in pursuing Sport England and setting up this opportunity. HSC were already active in delivering many of the requirements needed for the establishment of the Training Centre, with Stuart Jenkins already committed to the RYA Senior Instructor Training Course which is an essential element for the establishment of the Centre. The grant means that we have the opportunity of offering formal training from our Club by mid May 2018.

There are still many items to finalise and the Management Committee will keep you informed of progress.