Saturday saw twelve (12) Vintage Merlin Rockets compete in the last event of the season in the De May Series. The De May series is a National Merlin Event for boats and designs over thirty years old. This series is run with a handicap system for evenly matched racing.

The competitors and visitors were given a traditional warm welcome from Hampton Sailing Club. The welcome was top off with a 5 – 8 knot breeze from the SW supported by tea and bacon rolls as crews completed their entry forms.

It was good to see Mike Liggett from Hunts SC venture back to Hampton after many years away. He was a member of Hampton in 1957 where he learnt to sail Cadets and Merlins. Sophie Peerless (13 years old) sailed in a Merlin for the first and was introduced to the joy of sailing spinnaker dinghies.

Martin Hunter and Phil Dalby and their respective crews joined the fleet for the second race. Phil Dalby & Susannah Bell in 1761 took an early lead chased by the rest of the fleet. Four boats broke away from the fleet once more. This time it was Phil & Susannah, John & Olivia, Martin & Margaretha and Stuart & Sophie. Amongst these four racing was close which resulted in a dispute between Martin & Phil over water around a mark and a protest which saw Phil retire from the race. The final positions were John & Olivia 1st, Martin & Margaretha 2nd, Stuart & Sophie 3nd, Hywel & Lucy 4th.

John & Olivia had already won the event but clearly intended to make it a clean sweep. The first two laps saw a number of different helms in the top three positions but once more four boats battled it out for the majority of the race with John & Olivia 1st, Martin & Margaretha 2nd, Stuart & Sophie 3rd & Phil & Susannah 4th.

Octagon Trophy – presented to the Vintage Wing by Hampton SC for the 1st Vintage Merlin over the line prior to handicap adjustment.

Saturday night saw forty competitors and members sit down for a Club Merlin Curry organised by Nicky Page. The beer flowed until the sailors moved on to the traditional ‘Dark & Stormy’ rounds which finished late into the evening! A very well organised and enjoyable evening was had by all.

Sunday saw seventeen (17) Merlins take to the water. The breeze continued to blow from SW with a slight increase in strength to between 8 and 12 knots. Perfect conditions for Merlin sailing on the river.

Topped up with bacon rolls and tea competitors prepared their boats for the racing. Sail numbers ranged from 578 (1955 Martine Holt Design) to 3690 (Winder Canterbury Tales Design).

Racing was very close with positions changing regularly. The top four helms & crews constantly moved between 1st and 4th throughout all three races. At the start of the third race any of the first four crews could have won the meeting, but it was John & Olivia Bell how won the final race and the open. 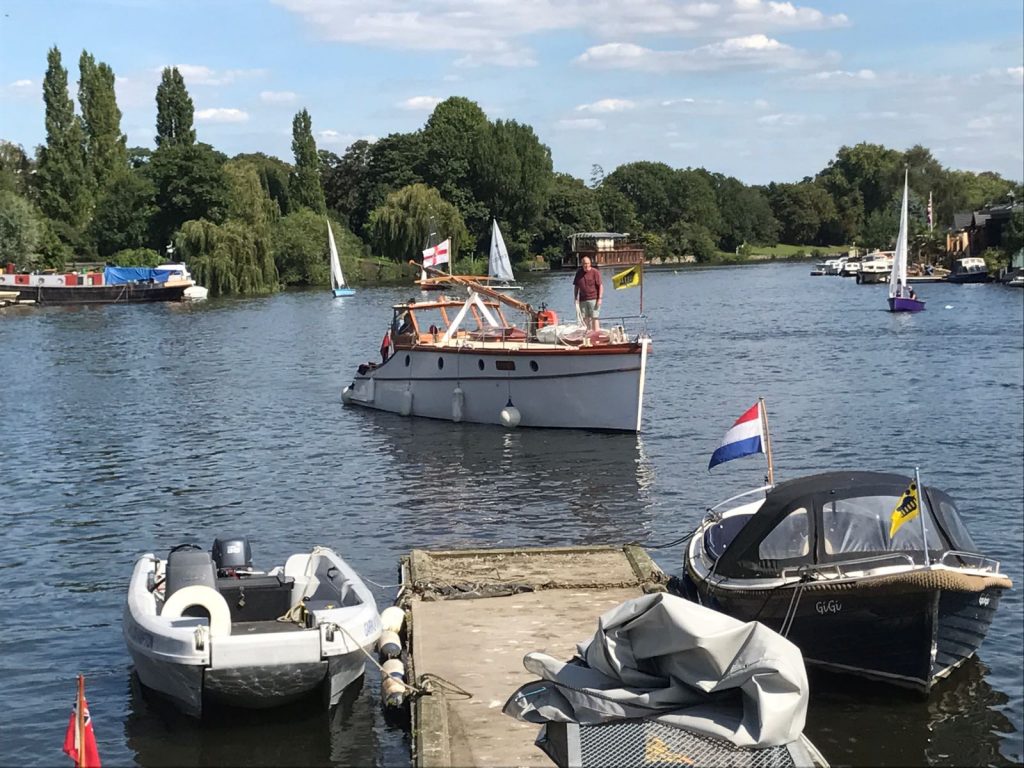 Hywel with Elvin returned to Hampton from his round UK voyage stopping off at Wales, Ireland, Scotland, Orkney, Fair Isles and back down the East Coast to HSC. The “Little Ship” ELVIN  also starred in the Film Dunkirk.

We are proud to announce that Marion Parslow has been awarded the British Citizens Award for Services to Education.

She is to collect her award on 26th January at the Palace of Westminster. All members at Hampton Sailing Club would like to congratulate Marion on this wonderful achievement and wish her a fantastic day collecting her medal. We look forward to seeing the photos and the New Frock!