The International Laser Class sailboat, also called Laser Standard and the Laser One is a popular one-design class of small sailing dinghy. According to the Laser Class Rules the boat may be sailed by either one or two people, though it is rarely sailed by two. The design, by Bruce Kirby, emphasizes simplicity and performance. The dinghy is manufactured by independent companies in different parts of the world, including Laser Performance Europe (Americas and Europe), Performance Sailcraft Australia (Oceania) and Performance Sailcraft Japan.

The Laser is one of the most popular single-handed dinghies in the world. As of 2012, there are more than 200,000 boats worldwide. A commonly cited reason for its popularity is that it is robust, and simple to rig and sail. The Laser also provides very competitive racing due to the very tight class association controls which eliminate differences in hull, sails and equipment. 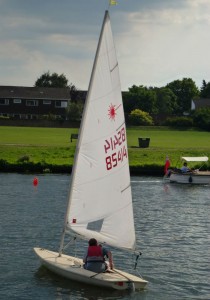 The lasers hull is made out of GRP, Glass Re-enforced Plastics. the deck has a foam layer underneath for strength.

Laser sailing and racing presents a unique set of physical and skill based challenges. Fast Laser sailing requires an advanced level of fitness in order to endure the straight legged hiking and body-torque techniques essential in getting upwind and reaching quickly.

Since 1998 Laser sailing has increased to not only be physical upwind and reaching but also to also include far more demanding sailing and potential speed increases when sailing downwind. Traditionally sailing downwind has been considered processional in dinghy racing, simply being pushed downwind. But Laser sailors, including Ben Ainslie and Robert Scheidt significantly changed the techniques used to race a Laser downwind. The techniques these sailors introduced uses a much more dynamic sailing method, concentrating on surfing the waves going downwind. The sailors will weave their way downwind, constantly looking to either side for the next large wave they can “hop” onto and surf downwind. To maximise their speed, boats will often be sailed by the lee, where the boom and sail will be allowed to travel significantly forward of the mast.

This change in technique for downwind racing has changed most dinghy racing to be much more competitive on the downwind legs and resulted in a change of the international course shape from a traditional triangle to a trapezoid giving greater opportunity for increased upwind and straight downwind legs.