Our annual Round The Island Race was held on Saturday last with hazy sunshine, warm
temperatures and a very light south westerly, which was enough to keep most boats moving
and also to just fill Merlin  spinnakers. Some great photos are here.

Nigel, The Race Officer, set a sensible course that made the most of the available wind that gently
propelled us anti clockwise  around Garricks Ait, which, of course is an island! There was even a
sniff of the Caribbean as the parrots squawked from the trees on the island and BBQ smoke drifted
down.

Thirteen boats joined this pursuit race made up of  five Enterprises, Jane/ Alice, Aviator / Annie,
Ian/ Ben, Me/ Timmy and Duncan/ Trevor (thank you Trevor for helping out). This was the first outing
for Elixir and we welcome its new owners, Duncan, Annie and Alice, to our
fleet. There were also five Merlin’s, two GP’s and one Foxer sailing. 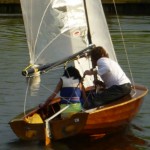 Simon in his Merlin ably crewed by Claude won the race comfortably. Then followed the traditional supper, cooked by various talented Chefs  and served by Anna and Maddie and it was delicious. Summer felt as  though it had arrived.