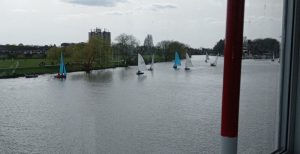 Sunny day with a delightful southerly, varying in strength between 6 and 9 mph, but sometimes surprising with reaches turning to beats and vice versa. Jolly duty team of Alan and Kevin so never a dull moment and much banter. It must have been chilly because our Timekeepers Hillary and Karen were frozen but they were suitably forbearing.
Just three again in the morning David Solo, Brian Comet and me with Jane Enterprise. Super start on port at the outer distance mark by David and shabby start by the other two who were too early and had to start at the club end. We blamed the wind piping up. Much endeavour was required to catch the crafty Solo but a jib helped. Good handicap result again with only seconds in it. 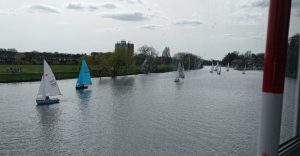 After a lunch and a pint of Engineer (crisp and olive or some such?) nice though, we had swelled numbers. Jane and Sophie Penwarden (experienced Merlin crew) and me with Sue (experienced GP crew).  Jane/Sophie got the jump at the start and never caught for the whole race, though at the very tricky I mark (it wasn’t a J Kev) they very nearly got caught twice and stopped chatting momentarily. 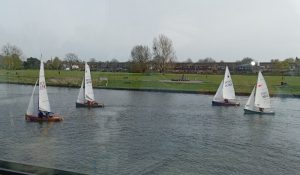 Three GP’s out John and Ali, George with Chris and Keith with Susan. They finished in that order. Too many laps quoth some!
In the Handicap was David Solo, Brian and James in their Comet’s.
Two Merlins having a close race Stu and Nicola and Rob with Claude.
Super tea by team Bunners and Maddie. Nothing Alfredian about your cakes Ava!  Also Harry was seen out at lunch time expertly sailing the veteran Laser ‘Fence Post’. He could not be persuaded to join the handicap fleet so David will have to deploy his tact and persistent methods to change Harry’s mind. He looks a natural to me.
It would seem softer, warmer winds are blowing over land and sea, happy lights are glowing etc – so see you next week.
Phill